by The Luck of Eden Hall 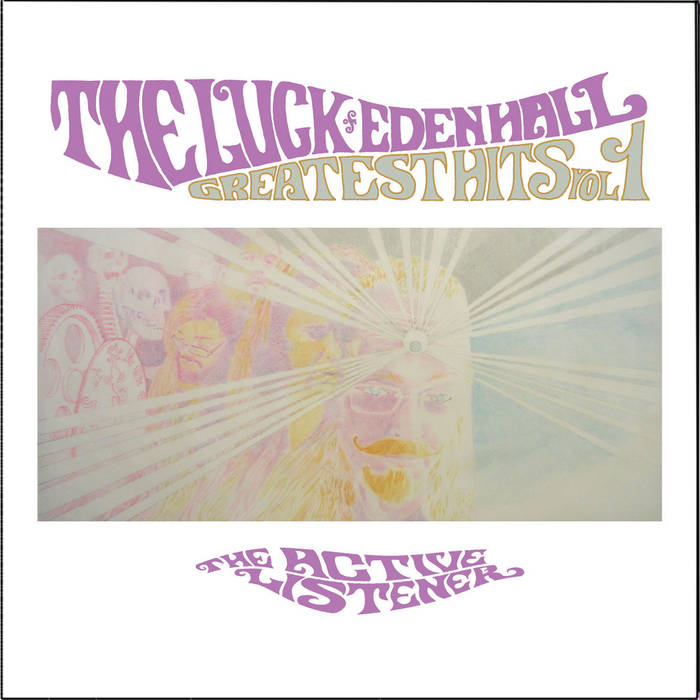 I’m biased because on this band-curated ‘introduction’ I got the one cut whose absence would have cause trouble down at City Hall. In the case of compilations and ‘greatest hits,’ that’s about as good as it gets. That’s just how it is. Given The Luck of Eden Hall‘s creamy and crunchy psych pop, it would be easy to pick a set of gems to spread across the running time almost like frosting. For The Active Listener Introduces The Luck of Eden Hall “Greatest Hits Vol. 1″, my version, I certainly would have picked different cuts. Would it be better? Absolutely not. It would be different, but still from an outsider’s perspective. Even though “Greatest Hits Vol. 1″ was put together by the band, they are fans as much as they are musicians, so it’s not an insider’s scoop either. It’s sort of that earlier dodged frosted smear between the two viewpoints. “Greatest Hits Vol. 1″ is a pretty loose collection for a pretty tight band that puts some not so obvious choices next to each other, playing up strengths and, depending on your perspective, pointing out some that may have been overlooked. Hanging onto last year’s Victoria Moon while reaching back to Belladonna Marmalade, you get 20 years worth of retrospective. With the added bonus of something other than your go-to picks. From Butterfly Revolutions through Victoria Moon there’d be a big temptation to put the spotlight on The Luck of Eden Hall’s psych-pop flourishes that coat a power-pop and chewy rock center. That’s two obvious sides to The Luck of Eden Hall that have always been there. With that string of albums next to the earlier outings, the biggest difference is really ratio. Mix them up together and how those two parts interact and work together is not only made clearer, but more interesting for the seasoned listener. For those who truly find this an introduction, then it’s as good a lure as any cold outsider could come up with. Having it appeal to both sides in a more balanced way may actually open up The Luck of Eden Hall box of sweets to even more sweet teeth. Other colors get their due when cuts like North Hampton Woods and Cinnamon Mary and Her Skeleton Cane make an appearance, showing a leaner candy-maker and the song base that is just as solid even when the psych-pop winds whips up on Dandy Horse and Sassafras Overcoat. Then there is Chrysalide … in my version, one of the most defining songs for The Luck of Eden Hall. Everything about them—the power chops, the psych embellishments … even the damn name of the song— come together in perfect ratio. But that’s my perspective … and there are more here than might seem obvious. For the recently introduced, it’s as solid as you’re going to get getting 20 years of albums and singles onto one disc. The core of the band, and the hooks, are here. For the veteran, there’s a fresher perspective than your own … from people you already trust. Taste-tested and approved.

This is a limited edition CD, only 200 printed copies are available. Comes housed in a gate-fold sleeve including two stickers and wrapped in a resealable plastic bag. Also includes two previously unreleased tracks: Laugh Your Life Away, Sugar Coated Savior.

The Luck of Eden Hall has been on the music scene since the 1990s, and they are “Phenomenal!”, says Jim DeRogatis of the NPR show Sound Opinions. They have nearly a dozen sold out releases on the critically acclaimed Fruits de Mer record label in England and have been featured on the cover mount CD in Classic Rock magazine, as well as Prog, Shindig, Record Collector, and Goldmine. ... more

Bandcamp Daily  your guide to the world of Bandcamp

Khruangbin and Greg Foat stop by with their amazing new LPs.